The following is the official English version of Our Lady's February 25th monthly message to the world, from the Information Center in Medjugorje, via Steve and Ana Shawl of The Medjugorje Web.

“Dear children! In this time of renunciation, prayer and penance, I call you anew: go and confess your sins so that grace may open your hearts, and permit it to change you. Convert little children, open yourselves to God and to His plan for each of you. Thank you for having responded to my call.”
Posted by Unknown at 6:28 PM 1 comment:

Last night I, along with my parents, fiance, and hundreds of others experienced at St. Andrew's Church in Billerica, Massachusetts a powerful prayer session and Mass with Ivan Dragicevic, one of the Medjugorje visionaries. The theme of the night: evangelize! 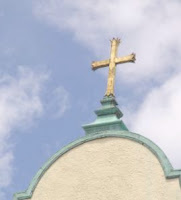 There was a palpable electricity in the building at the beginning of the night, an energy in the packed house that I don't think has been matched by any Mass I have ever attended. It seemed there was eager anticipation by many who had not yet heard Ivan speak, to learn about his experience as a visionary and why the Virgin Mary has been appearing to him and giving messages to the people of the world for 28 years. But the highlight of the night may have been the homily by the pastor of St. Andrew's, Fr. Michael Parise.

Fr. Michael, during a Mass celebrated after praying the Luminous and Sorrowful Mysteries of the Rosary, delivered a bold, challenging message to the congregation: Those who had come that night to see Ivan had come to the wrong place!

He explained what everyone had come to experience was truly a gift from God, but the point of the evening was not to see some spectacle of the Virgin Mary or hope for some miracle to occur. He criticized those who followed Ivan from place to place across the world, simply putting another "notch in the belt" of how many times they had seen Ivan. He pointed out the only other times he has seen his church as filled as it was last night was during Christmas Masses, and that while the United States media is always pointing out the high percentage of Americans that state they are Christians, the number of practicing Christians is actually utterly pathetic. The point of this evening, according to Fr. Michael, was to take this incredible blessing from God and go back to our parishes, communities, and families and live the messages and spread the Word of God, otherwise the blessing of the evening was lost.

Ivan carried the message in his own lecture, a beautiful, sometimes humorous account of the story of his life as a messenger of the Virgin Mary, saying Fr. Michael was correct in what he said, and that we should realize Ivan is simply like the rest of us, and not some holy figure to be admired. He said it is Our Lady of Medjugorje's wish that all will be called to a more holy life as a result of the messages, because as a whole the people of the world are currently on the wrong path.

Ivan, who experienced his daily apparition at 6:40pm EST, during the 9th decade of the Rosary prayed last evening, shared the message from Our Lady that evening, saying Satan was working hard to destroy her plan on Earth, and that only through our prayers, fasting, and penance can she achieve her plan of converting the hearts of all throughout the world to complete surrender to and love of God.
Posted by Unknown at 9:25 AM No comments:

I heard an interesting story while watching EWTN this week and thought it would be something nice to post here, since I am leveraging the Internet to spread the word about Our Lady of Medjugorje's messages to the world: The Vatican has launched a YouTube channel!

You can stay up to date on the latest Vatican news in Italian, English, Spanish, and Dutch. They have created a custom YouTube page that has lots of videos.

I think this is a good step into the Internet world for the Vatican, and a great way to stay up to date on what Pope Benedict XVI is asking of the world.
Posted by Unknown at 6:03 PM No comments:

Below you will find the official English translation of Our Lady's January 25, 2009 message to the world. This translation was provided to me by Steve and Ana Shawl, of Medjugorje Web (www.medjugorje.org).

INVITED TO WALK THE WAY OF HOLINESS

"Dear children! Also today I call you to prayer. May prayer be for you like the seed that you will put in my heart, which I will give over to my Son Jesus for you, for the salvation of your souls. I desire, little children, for each of you to fall in love with eternal life which is your future, and for all worldly things to be a help for you to draw you closer to God the Creator. I am with you for this long because you are on the wrong path. Only with my help, little children, you will open your eyes. There are many of those who, by living my messages, comprehend that they are on the way of holiness towards eternity. Thank you for having responded to my call."


In the encounter with God everybody finds the right path and becomes aware of the truth about oneself at the same time. Prayer is the easiest way in which we can encounter Jesus, who is the meaning of our lives. The basic prerequisites in order to pray in the proper way are: honesty, humbleness and courage, which help us to reach for God in an easier manner. In her message of 25 January Our Lady calls us to prayer, as she has done so many times so far. She is also giving us an answer as to why she calls us by saying: “Prayer will be for you like the seed that you will put in my heart, which I will give over to my Son Jesus for the salvation of your souls.” The way of salvation is the way of holiness. In her message of 28 March 1985 Our Lady says: “Dear children! Today I wish to call you to pray, pray, pray! In prayer you shall perceive the greatest joy and the way out of every situation that has no exit. Thank you for starting up prayer. Each individual is dear to my heart. And I thank all who have urged prayer in their families.” When Our Lady speaks of prayer, what she primarily has in mind is families praying together. The best prayer is the one that we say together with Our lady while following the path to our salvation and to the salvation of the world. The path that we follow through prayer is the path leading us to Jesus. Therefore, it is important to pray with your heart, which means praying with your whole being.

Rarely do we think about eternal life, although man has been created for the eternal life in the fellowship with the love of God. There are various obstacles on our way to eternity. These are primarily earthly things, which are like dust in our eyes preventing us from falling in love with eternal life, which is our future. When reading the Book of Genesis we can see that God called upon man to be his partner on earth. Man received a command from God to subdue the earth: «Be fruitful and increase in number, fill the earth and subdue it…» (Gen 1:28). We are called to use things, such as TV, mobile phones, newspapers, alcohol, cigarettes, drugs and others, not to be slaves to them. Our homeland is not here on earth. We are mere passers-by here. We have been called not only to reign as kings and rule the earth, but to prepare ourselves for eternity.

Our Lady gives the answer to all those who are wondering why she has been appearing for so long. She says: «I am with you for this long because you are on the wrong path». To be on the wrong path means to be far away from God. Clear signs that a person is on the wrong path are restlessness, guilty consciousness and discontent. All those who do not follow the commandments of the Church, who commit grave and deadly sins, who always put themselves first, who always have to be right, are the ones that are on the wrong path. Our Lady has been with us for so long in order to help us open our eyes to see what real values are. At the end of her message she encourages those who have responded to her call. Our Lady says: «There are many of those who, by living my messages comprehend that they are on the way of holiness towards eternity». This message encourages us all to be better and again make the decision to continue to grow in holiness.