So, I had this vision of each day of my first pilgrimage to Rome and Medjugorje wrapping up the night by spending a few minutes with the laptop and Internet, getting down my takeaways and feelings and sharing them with you. Due to a time limit of 30 minutes per session on what had to be a DSL line at the Hotel Michelangelo in Rome (nothing like taking Internet speeds back to the year 1999) and no Internet connection at our hotel in Medjugorje, it wasn't to be. But, hindsight being 20/20, it's clear to me now that was God's design. There is no doubt in my mind about that now.

I don't even know how to begin to describe this trip. I keep using the words "incredible" and "amazing", but it runs so much deeper than that. This was the best trip ever. That gets close to describing it, but to you I might as well have been on a Caribbean beach ... spiritually fulfilling? How about "It provided answers and miracles in my life where I didn't see the path". Yeah, that's better. No "vacation" will ever give you that, and that's the point I'm trying to get across. First of all, it was awesome to be there. My wife and I have never been overseas together before, so this was a real treat for us. And, for me, it was great to be in a place steeped in so much history. I watch every History show about ancient Rome. Ancient Romans were so advanced in their technology. They were enlightened in their thinking. They designed with purpose and precision. They were tragically flawed, and give us much to learn about excess in our lives. It just fascinates me ... And when you mix that with incredible architecture and the fact that we're visiting the earthly seat of power for the Catholic faith, it was just awesome to soak in.

We did many things, include visit basillicas, the Vatican museum ... we went for the weekly Papal Audience and were within a couple of feet of Pope Benedict XVI. We ate gelato and sat at an outdoor cafe ... It was fun. And, standing in St. Peter's Square, which was built near where St. Peter was crucified, I just felt such reverence for Peter. I'm inspired by him, because he was the first, after Jesus. He had so much responsibility and so much to lose. But he kept the faith. And built the faith.

But, despite all of these great things we did (and there were so many more than I listed), and despite the fact our Rome trip included daily Mass, I think my wife would agree we didn't have a spiritual experience there. Boy, did that change.

After too many flights, lost baggage, and running through airports to get to connecting flights on the verge of leaving without us, as well as a 2.5 hour bus ride, we arrived in Medjugorje. I'm tearing up as I type this, just thinking about being there. I'll never forget it.

But that's not to say the first impression was a good one.

I've been reading so much about the simplicity of Medjugorje over the years, in books written in the 80s, 90s, and even early 2000s. But my wife and I were a little taken aback by the commercialism there now. Everywhere along the streets surrounding St. James Parish, the main church in Medjugorje, there are shops and stores and markets and restaurants. It was way more than I expected, and even a member of our group who had been there several times before, including as recently as two years, commented it's changing and is different than it used to be. And then there was the hotel room.

Staying in Medjugorje is an experience unlike any other, including the hotel. You see, Our Lady requested the villagers open their homes to pilgrims. As more pilgrims have come over the years, the families have converted their homes into hybrid homes / hotels. But they're still family-run, and they serve you meals and provide board. But it's truly no-frills. In fact, my wife and I had to sleep in separate beds. Oh, boy, was I scared.

You see, my wife was coming on this trip with me, but she had not read as much as I or learned about Medjugorje as much as I have over the years. She was doing this in great part to fulfill my personal desire to go. And I was so concerned this would be just too much for her. I was wrong.

I really want to get away from the first impression of Medjugorje, because those feelings soon melted away. Each day just got better and better. In fact, I'm going to stay away from taking you through a minute-by-minute replay of the trip. Because that's not how I remember Medjugorje, and I want to relay to you what I felt there. And that was pure, utter peace.

It is the best place on Earth. It is how God wants us to live. It is not technology and business, but quiet and slow-paced. It is reverence for the sacraments, and love of the sacraments, and wanting  to be closer to God. It is healing in every sense: mind, body, and spirit. It is with me now, in my heart. Have I mentioned anything about miracles, like spinning suns, apparitions or bleeding statues? No, and if you visit there you'll just get it. Those aren't the important things.

I could sit here and type out exactly what happened, but you wouldn't get it. In fact, you would be inclined to chalk it up to a coincidence, or just us being overzealous or looking for signs. I'm not criticizing you. It's just that God speaks to each of us differently. We know if our hearts when he is answering us, and it's too difficult to get anyone to understand. You've probably had those experiences yourself.

All I can tell you is my wife and I love each other more deeply, we've found solutions to the problems we brought with us to Medjugorje, and we understand more closely what God expects of us in our lives. And we were there only four days.

If you have an urge to go to Medjugorje, go. Find a way. Actually, pray for a way. God will pave the path.

Yeah, we saw something happen with the sun. We saw a bleeding statue. We were present, on Apparition Hill, during an apparition of Blessed Mary to Ivan, one of the visionaries. But my favorite moment had nothing to do with any of that, and occurred during our last full day in Medjugorje, as the seven of us in our tour group sat together at lunch.

We had not eaten together, all at the same time, once during our trip. And, as we were passing around the food, and unprompted, we started to go around the table, describing what was happening to us in Medjugorje ... And the tears started flowing.

One described how she had come to Medjugorje because she heard about it, but didn't know if she would feel anything. And she was sobbing uncontrollably, describing how in this short time she realized how much God loves her ... Another, who was relatively quiet during the trip, had no trouble finding the words to tell us what she felt in her heart during Eucharistic adoration, how she felt how much Jesus loved us in his sacrifice for us ... Another told us he felt a calling to go to confession, and, seemingly miraculously, a priest who had no reason to speak with him came out of nowhere, asked him if he could help him with anything, and told him where he might find a Korean priest (he felt he needed a Korean priest, as English was a little tougher for him and he wanted to do a good confession) ... My wife and I told of our story, at "The Castle", where we felt we received a direct answer from God (which involved blowing wind and a slamming door, as if to emphasize the point) on an important issue we discussed only a few minutes prior to arriving there ... And on and on it went ....

Do you see where I'm going with this?

There are many graces available at Medjugorje. If you go looking for miracles in the sky and apparitions of Our Lady, you might miss it. But we don't have to go to Medjugorje to experience them.

These graces are available here, at home. They're in our churches. They're the sacraments. All you have to do is open your heart to them, understand them, and you'll get it. That's the point of what is happening at Medjugorje ... Mary is coming to us with messages, but only to point us to the sacraments, and prayer with the heart.  If we return to prayer with the heart, the graces will flow from there.

And my wife, who came on this trip for me? I laugh just thinking about this, but she was on fire as soon as she came home. She's been talking about the trip with coworkers and family. I've seen tears when she talks about the trip and what it meant for us. It means more than she realizes to have her "get" the things I've been reading about all these years, and to be my side, helping me tell others about it.

Learn about Medjugorje! You'll find answers to everything.
Posted by Unknown at 8:42 AM No comments:

Email ThisBlogThis!Share to TwitterShare to FacebookShare to Pinterest
Labels: pilgrimage

Medjugorje - Our Lady's June 2nd Message to the World 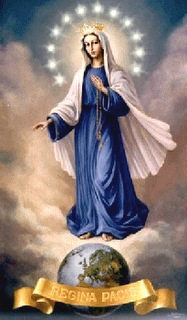 "Dear children! My prayer today is for all of you who seek the grace of conversion. You knock on the door of my heart, but without hope and prayer, in sin, and without the Sacrament of Reconciliation with God. Leave sin and decide, little children, for holiness. Only in this way can I help you, hear your prayers and seek intercession before the Most High. Thank you for having responded to my call."
- Message from Our Lady to Mirjana, June 2nd, 2011
Posted by Unknown at 5:49 AM No comments: