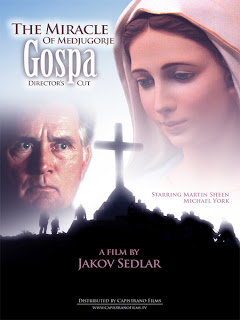 I am writing this blog post today to defend the Sheen (as in Charlie Sheen) family name.

Okay, I'm not. But I think it will at least balance out for the Sheens what Charlie is up to these days. At least for his father.

Martin Sheen, Charlie Sheen's Dad, plays the lead role of Fr. Jozo Zovko in Gospa: The Miracle of Medjugorje (1995), a film by Jakov Sedlar. Zovko was the Medjugorje priest to whom the visionaries, in the apparitions' first days, confided and sought protection.

Now I truly didn't time the review of this film to coincide with Charlie Sheen's tour. It just happened to work out that way (my Sister-in-Law, Emily, gave me this DVD for Christmas and I just recently got around to watching it).

And I truly could not care any less about what Charlie has been doing recently, so I'm not actually writing this in response to anything he has said.

But I will state this: You will not see me recommend many dramatizations of what is happening in Medjugorje (Medjugorje dramatizations are typically low-budget and I can't get past the "cheese" factor). That means I think this is worth watching.

For those who don't know the entire story of Fr. Zovko's role in the apparitions, I won't give away too much, so you can watch this and appreciate what he endured. But the main context is that the claims of the children who said they were seeing the Virgin Mary quickly brought thousands of people to congregate in Medjugorje, at a time when the hamlet was part of Yugoslavia and under Communist rule. The atheist state government of the time didn't care for religion, but cared even less for large congregations of potential revolutionaries (any gathering which brought thousands together was deemed a threat).

If this story sounds familiar to you, it is because there was a similar situation when Our Lady appeared to three children in Fatima, Portugal, in 1917. And the ramifications for those involved were similar, if not worse in Medjugorje.

Sheen does a nice job in this quick-moving film (1 hour, 45 minutes) of playing the priest who felt compelled to believe these children who were under attack from the government and much scrutiny by the area bishop. And he is not the only actor you will recognize. 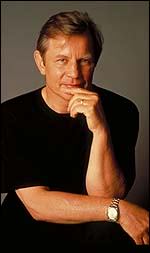 Michael York (left) plays Zovko's legal representative when the state took Zovko to trial. Morgan Fairchild plays a nun who provides much support to Zovko as he struggles with what to do about six children claiming to see the Blessed Mother and a government which wants nothing less than his death for the crowds drawn to his parish.

This film is not  intended to provide more insight into the apparitions or explain their meaning. But I found it gripping, nonetheless.

So much attention (and rightfully so) is given to the visionaries and the messages from Heaven they carry. But Fr. Zovko faced some serious challenges and decisions in the apparitions' early days. I think this film does a great job of relaying that and I found that after watching it I was emboldened to continue my work of spreading the messages to my family and to you!

There are a couple of good reviews of the film at Amazon.com. You can read those and / or purchase a copy by clicking the image below: